The sign database for the Argentinian Sign Language, created with the goal of producing a dictionary for LSA and training an automatic sign recognizer, includes 3200 videos where 10 non-expert subjects executed 5 repetitions of 64 different types of signs. Signs were selected among the most commonly used ones in the LSA lexicon, including both verbs and nouns.

The following table lists the id, name and hands (H column) used in each sign. The column H specifies whether the sign was performed with the right hand (R) or both hands (B).

The database was recorded in two sets. In the first one, 23 one-handed signs were recorded. The second added 41 signs, 22 two-handed and 19 one-handed as well.

In both sets of recordings, subjects wore black clothes and performed the signs standing or sitting, with a white wall as a background. To simplify the problem of hand segmentation within an image, subjects wore fluorescent-colored gloves. These substantially simplify the problem of recognizing the position of the hand and performing its segmentation, and remove all issues associated to skin color variations, while fully retaining the difficulty of recognizing the handshape.

Each sign was executed imposing few constraints on the subjects to increase diversity and realism in the database. All subjects were non-signers and right-handed, were taught how to perform the signs during the recording session by showing them a video of the signs as performed by one of the authors, and practiced each sign a few times before recording.

The camera employed was the same in both sets of recording (Sony HDR-CX240). The tripod was placed 2m away from the wall at a height of 1.5m. Marks on the floor were used to indicate subjects where to position themselves. The resolution of the videos is 1920 by 1080, at 60 frames per second.

This work is licensed under a Creative Commons Attribution-NonCommercial-ShareAlike 4.0 International License.

This basically means that:

Please contact the authors if you are unsure about what constitutes fair use under this license, or need to use the dataset under a different license.

The raw version of the dataset contains one video for each sign in the dataset. Each video weights on average 600kb. The whole dataset weights 1.9gb.

The cut version is similar to the raw version but each video has been temporally segmented so that the frames in the beginning or end of the video with no movement in the hands were removed. Each video weights around 500kb on average and the whole dataset weights 1.5gb.

We provide a pre-processed version of the dataset to alleviate the overhead of performing experiments with the data.

From the dataset we extracted the hand and head positions for each frame, along with images of each hand. Each image was segmented, leaving only the hand with a black background.

The tracking and segmentation of the hands uses the techniques described is the same as the one used to pre-process the LSA16 handshape dataset LSA64. Additionally, the head of the subject is tracked via the Viola-Jones’s face detector. The 2D position of each hand is then transformed to be relative to the that of the head. The positions are then normalized by dividing by the arm’s length of the subject, measured in centimeters/pixels. In this way, the transformed positions represent distances from the head, in units of centimeters.

The result of this process is a sequence of frame information, in which for each frame we calculate the position of both hands, and we extract an image of each hand with the background segmented.

The preprocessed version contains a Matlab file with the positions of the hands of the subject for each frame (normalized wrt the head position), and a set of hand videos, one for each repetition of each sign and each hand.

If you use the dataset, we kindly ask you to cite LSA64: A Dataset of Argentinian Sign Language:

Sample snapshots of the dataset. The images on the left (first column) are from the first set of recordings.

Mean initial and final position of each class of sign, for the left and right hand. The circle/ellipse size is proportional to the covariance of the position around the mean, which is the center of each ellipse.

Sample trajectories of the right hand (purple) and left hand (green) of samples performed by subject 2. 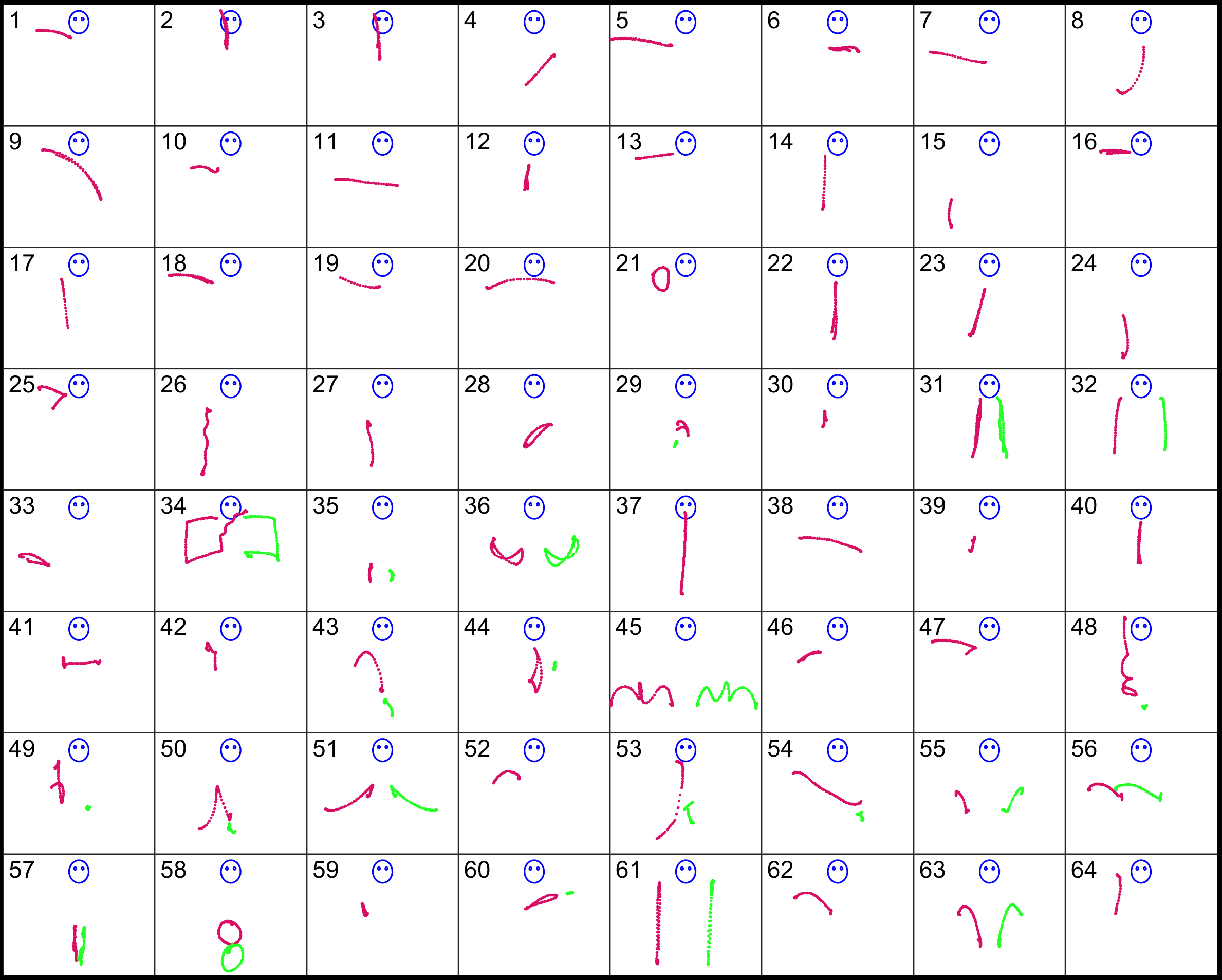 Sample handshapes. We show the first frame of the first repetition of each class of sign by subject 1. 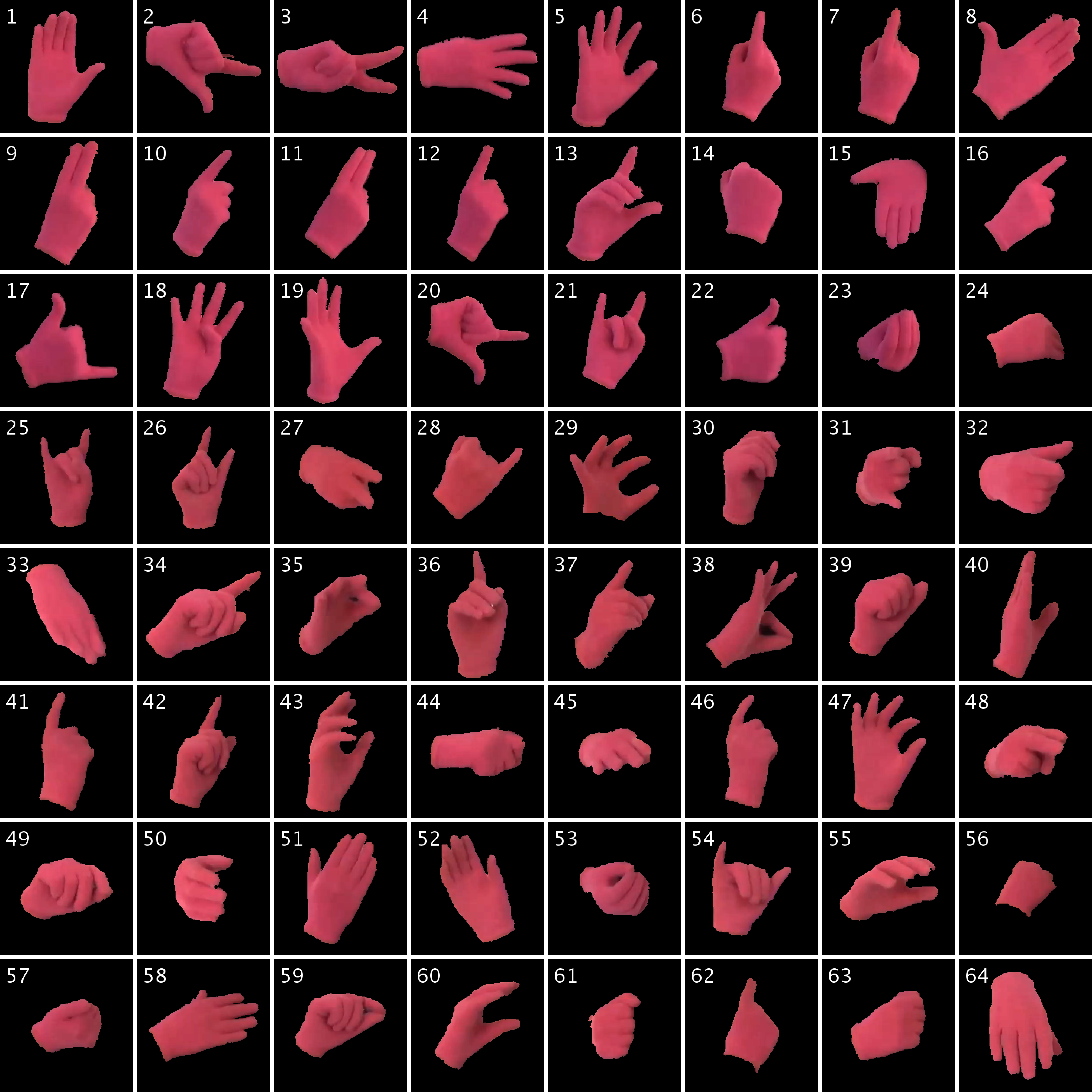